Tag Archives: two and a half men 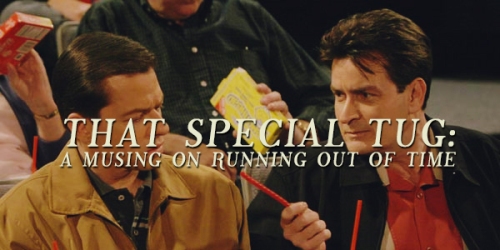 I wanted to talk about Two and a Half Men. The early seasons of that show have circled back to me, specifically through my housemate’s readily available Amazon Prime subscription, and my refusal to do any revision work outside working hours if I can help it. I’m not in the mood to start anything new, so my first ever favourite TV show will do. I learned English from watching Two and a Half Men. I learned everything I know about relationships (explains a lot, I think) from it. The early seasons are so wholesome–I’m up to season 3.

I have two all-time favourite episodes, and one is 3×12 That Special Tug. I couldn’t remember the plot straight off the bat, but I could remember what the next scene was throughout. No surprises there, I guess. Kind of comforting. If you’re not familiar either: it’s the episode where we meet Jane Lynch as Charlie’s psychiatrist. It’s set in flashbacks from an eventful weekend: Charlie and Alan go to the cinema, Alan has a few breakdowns; they go check on a 13-year-old Jake at his sleepover, and Alan has another breakdown as his child ‘hates him’ (lil dramatic), and. . .so the story goes.

END_OF_DOCUMENT_TOKEN_TO_BE_REPLACED

Tagged two and a half men